If you are here so probably, you are looking for the best th6 bases, right? If yes, so don’t worry. Now, you don’t have to go anywhere because these th6 builder bases are anti 1 and 2 starbases. These bases can help you to defend against night witches, bombers, and the boxer giants. So without further ado, let’s discuss the best bh6 bases. 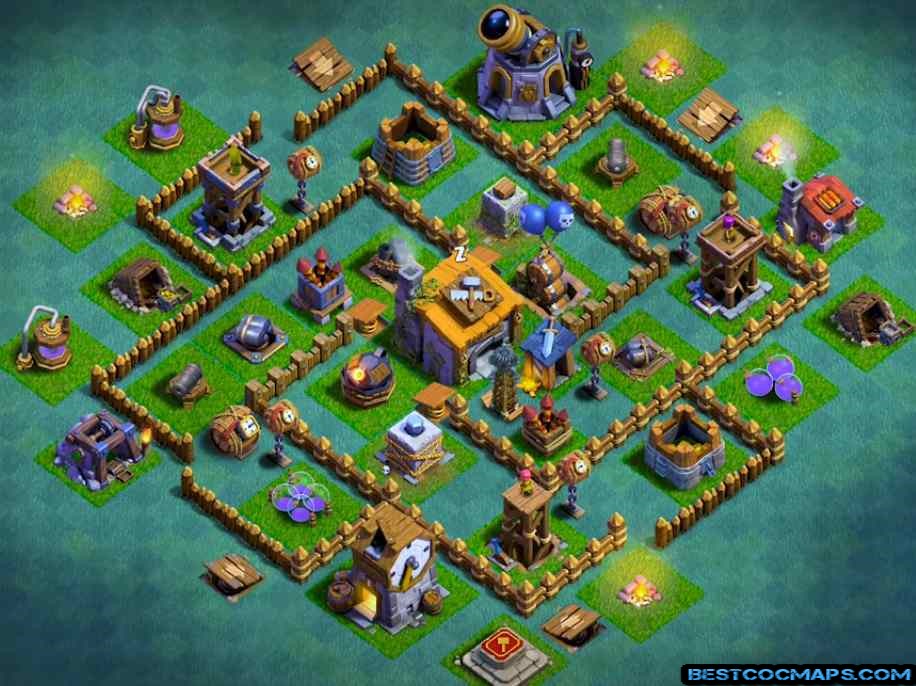 Below the center, we have the spring trap, roaster, crusher, and archer tower along with the gold storage. An air bomb, crusher, gold storage, and an archer tower are at the top left compartment. Four army camps, star laboratory, three spring traps, gem mine, clock tower, builder machine, an elixir collector, gold mine, and builder barrack are outside the walls to protect the base. 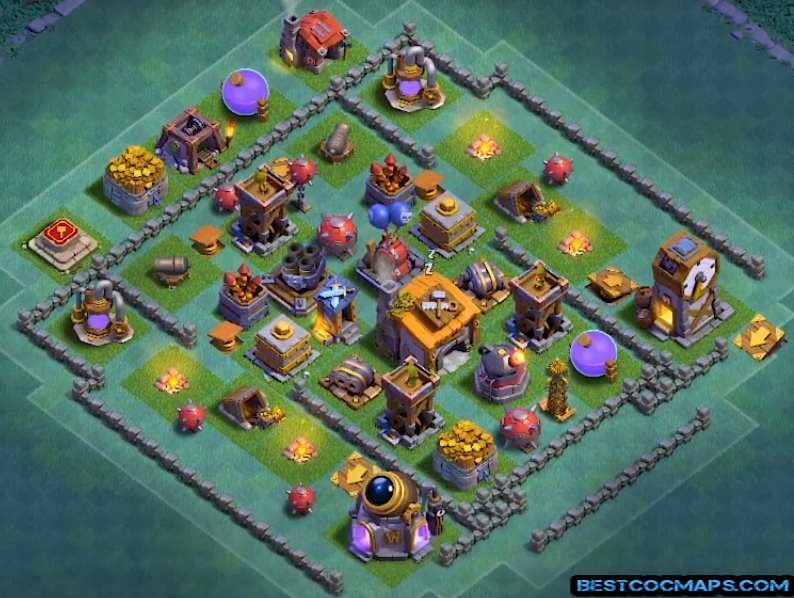 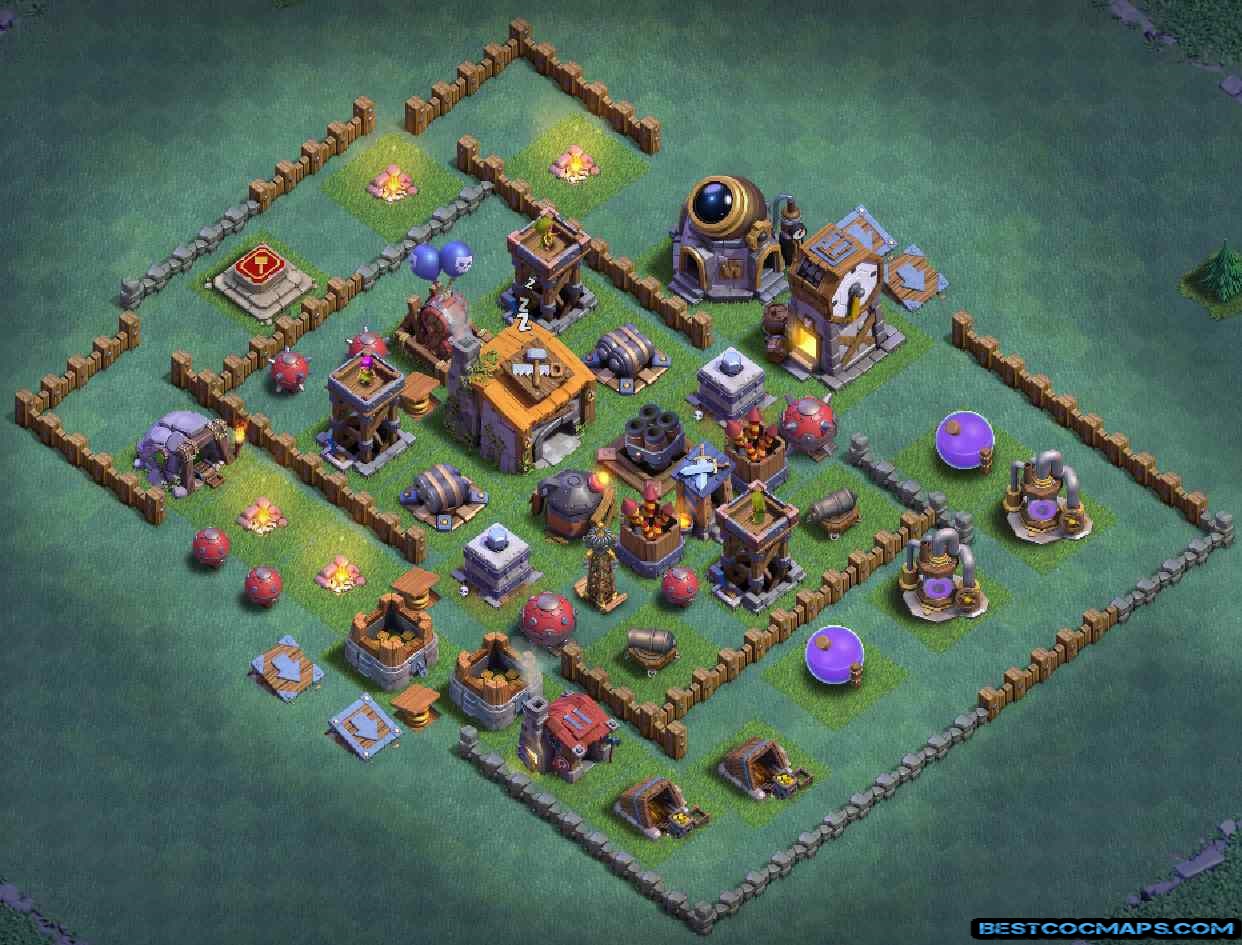 Below the center, we have the star laboratory, two mines, two army camps, a push trap, gold mines, and an elixir collector. Builder barrack, elixir collector, gem mines, gold storage, and the builder machine, are outside the walls to defend the base against the attackers. 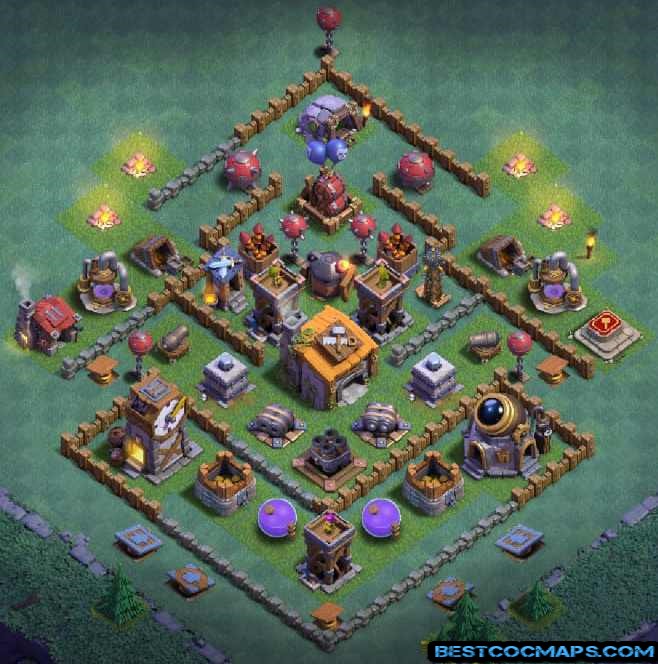 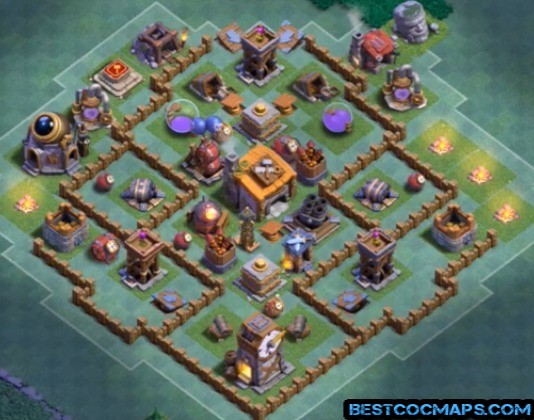 The clock tower, star laboratory, builder machine, builder barrack, gem mine, four push traps, four army camps, two mines, two gold storages, spring trap, two gold mines, two elixir collectors, and two elixir storages are outside the center to protect the base. So after observing this base, we can say that this base deserves to be in the best bh6 bases list. 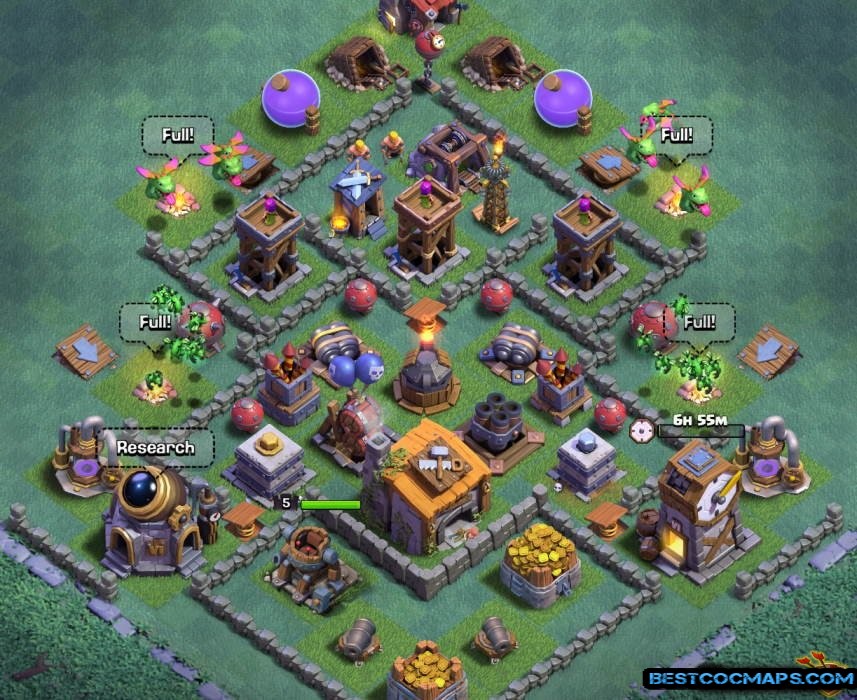 In the center, we have the builders hall, two double cannons, two crushers, two cannons, two spring traps, and the multi mortar. Two elixir storages, two gold storages, an archer tower, a clock tower, and the star laboratory are at the bottom right. 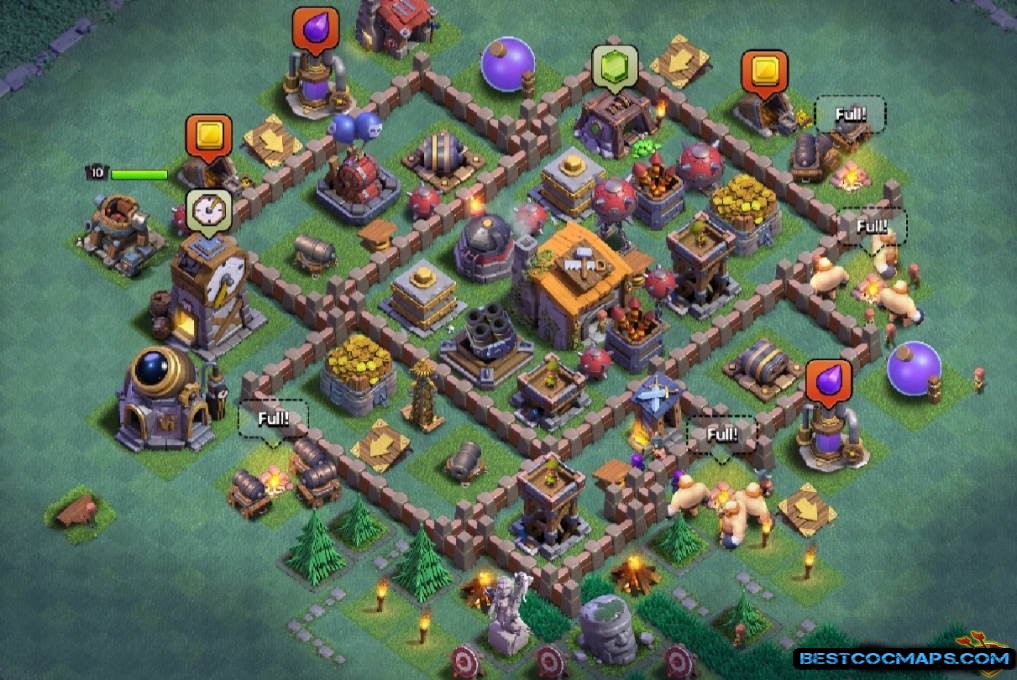 Above the center, we have two archer towers, a hidden tesla, a guard post, a roaster, two firecrackers, two mines, and an air bomb. Builder machine, two elixir collectors, two gold mines, two mega mines, gem mine, and the builder barrack, are at the top left. Four push traps, four army camps, and mine are outside the walls to defend the base. 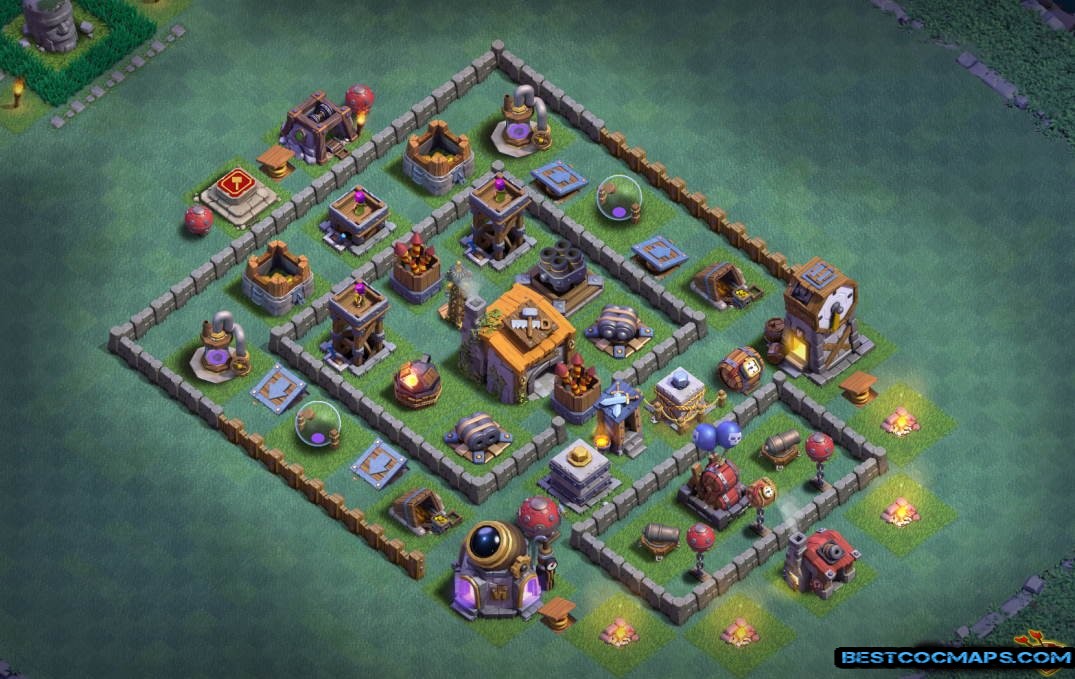 In this base, we have plenty of buildings which are starting from the top left and ending at the bottom right. The buildings are the builder’s hall, clock tower, two cannons, two crushers, two firecrackers, guard post, three spring traps, roaster, multi mortar, hidden tesla, an air bomb, two elixir collectors, two gold mines, an archer tower, and two spring traps. 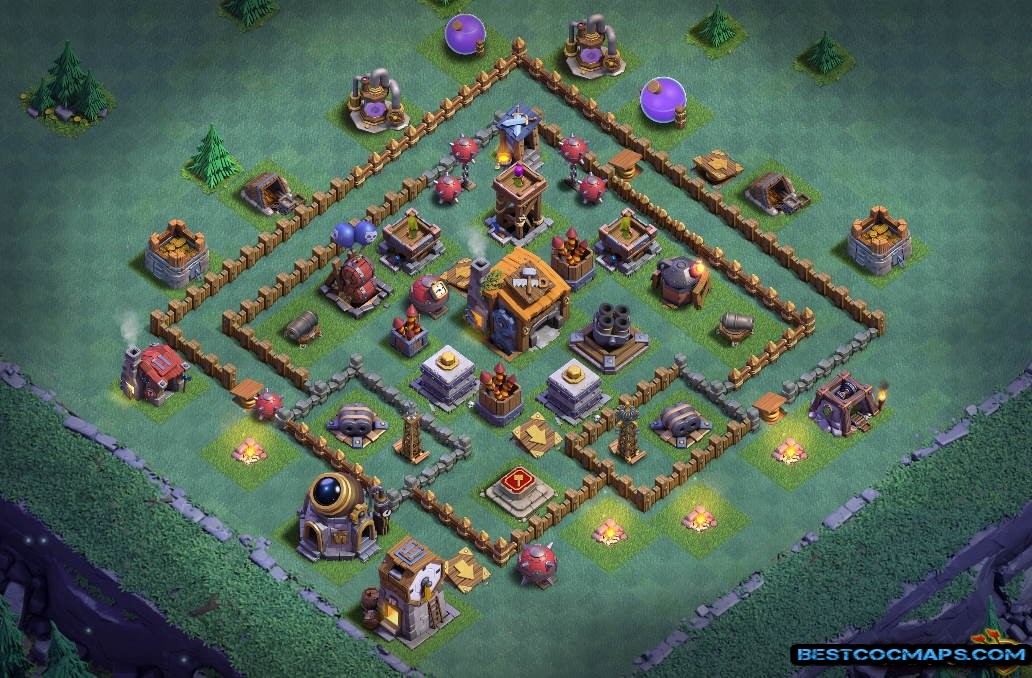 At the bottom left and the top right, we have a cannon and two mines. An archer tower, push trap, gold storage, four army camps, star laboratory, two elixir collectors, builder machine, gem mine, and the builder barrack are outside the walls to protect the base. 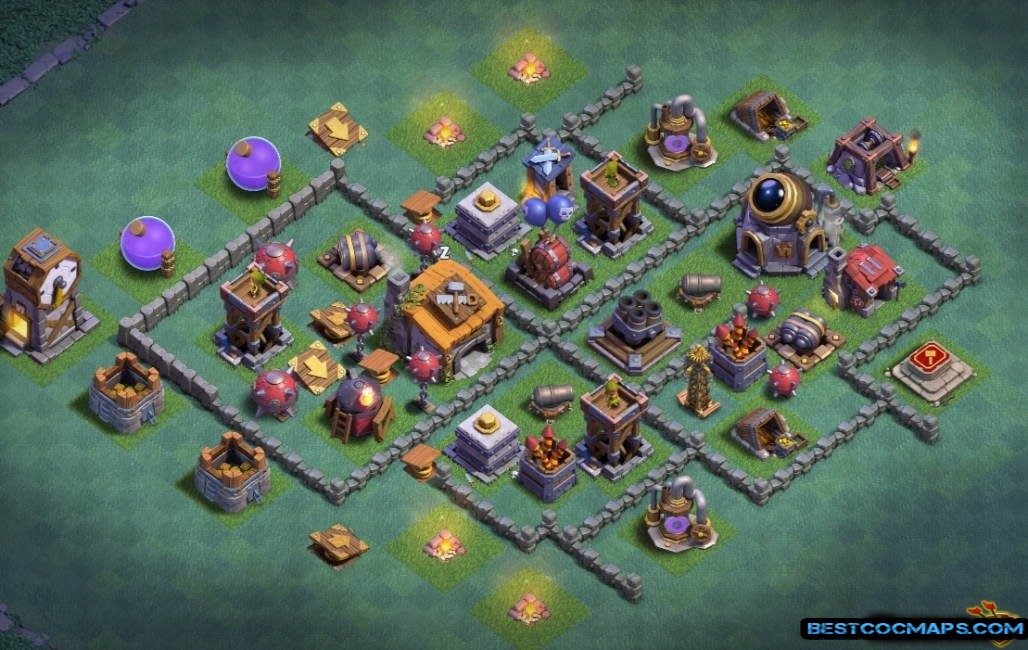 So these are the builder hall best bh6 bases, download these designs by pressing the download button and use these bases without any worry.