If you are on this post, so you are probably looking for the best bh7 bases, right? If yes, so you have come to the right place. The bases which are going to discuss today can defend any type of attack like Night witches, bombers, Battle machines, etc. So without wasting any time, let’s discuss the best bh7 bases 2021.

Most of the buildings are inside the walls in this base. Builders hall, gold storage, two double cannons, hidden tesla, two firecrackers, two cannons, an archer tower, roaster, guard post, multi mortar, two crushers, and a giant cannon. 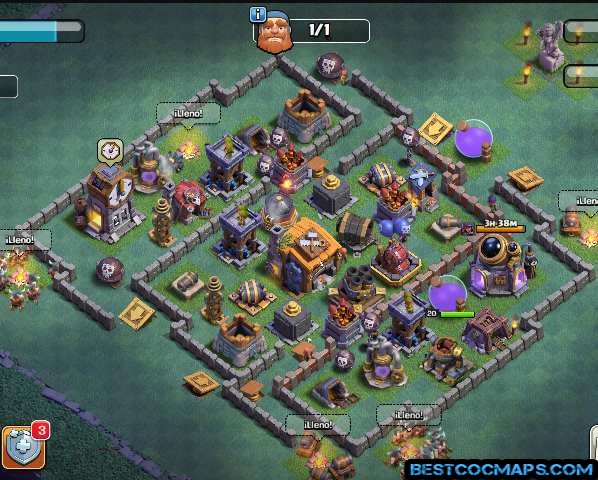 At the left of the base, star laboratory, a mega-mine, mine, gold mine, two elixir collectors, an archer tower, and elixir storage. The clock tower, elixir collector, three mines, hidden tesla, builder barracks, army camp, an archer tower, army camp, gold mine, firecracker, and the gold storage. Four army camps, two push traps, elixir storage, and a mine, are outside the walls. 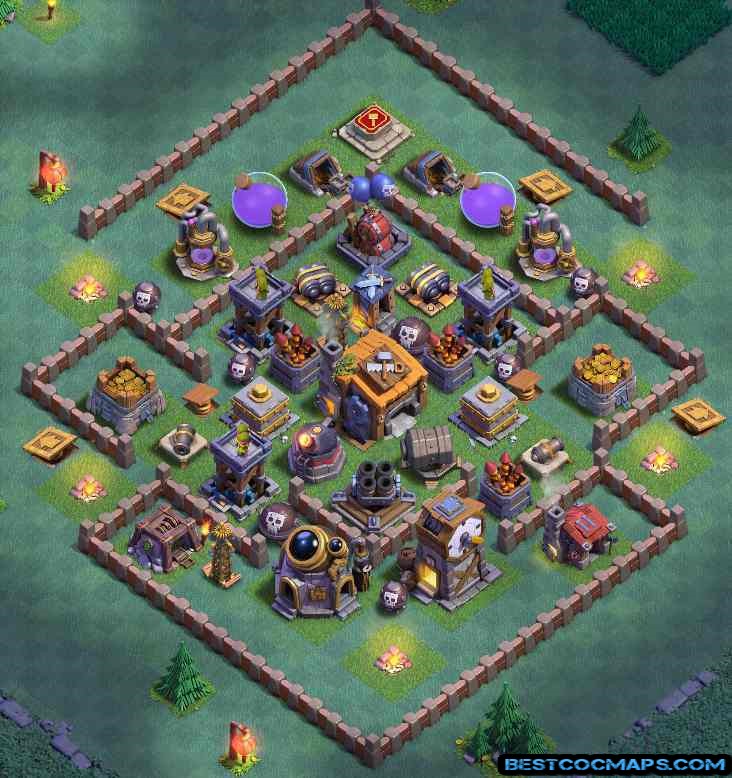 We have put this design on this list because it’s one of the best bh7 bases. In the center, we have the builders hall, three archer towers, two double cannons, guard post, two cannons, roaster, two crushers, three firecrackers, multi mortar, three mines, and a giant post. Two gold storages are at the left and right of the center. 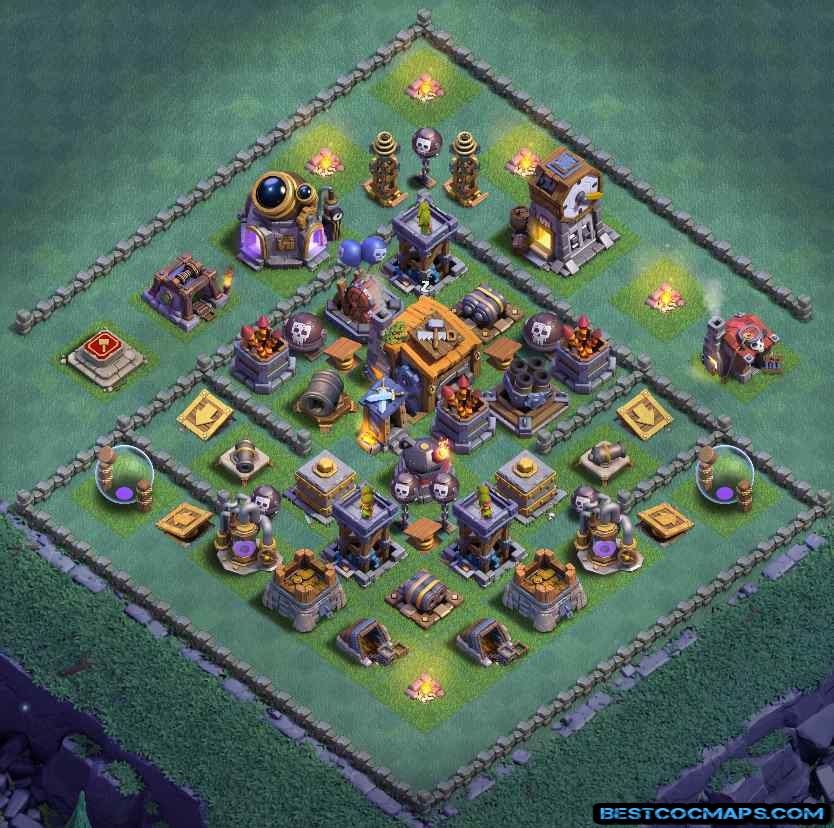 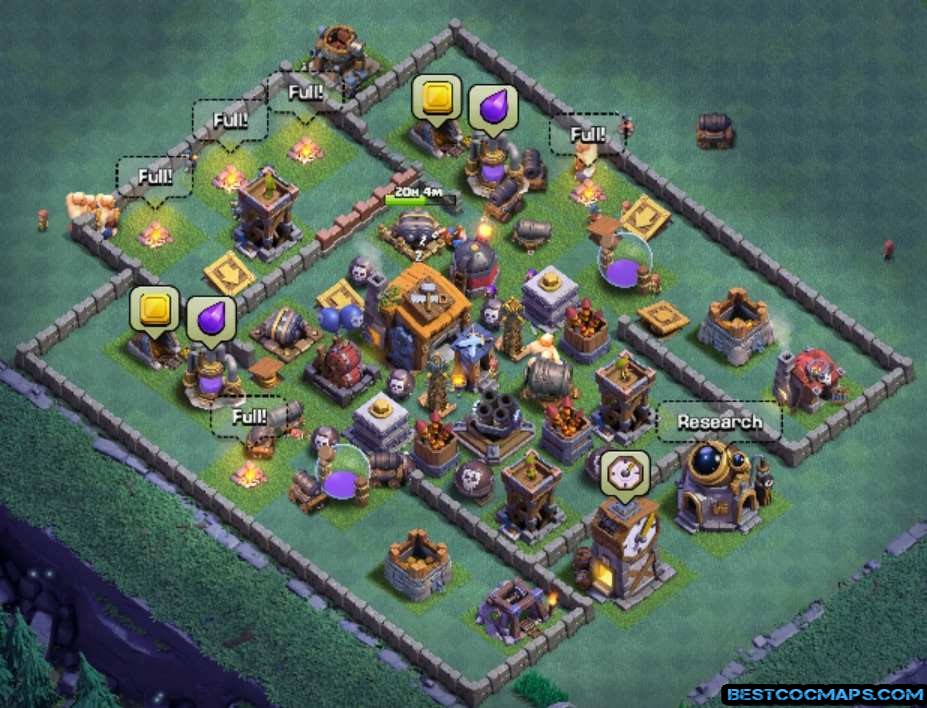 Builder’s hall, guard post, three firecrackers, giant cannon, multi mortar, roaster, two mines, double cannon, and an archer tower are at the center. Below this compartment, we have two push traps, two cannons, two crushers, two archer towers, and a spring trap. Elixir storage, push trap, elixir collector, gold storage and gold mine are below this base. Identical buildings are at the right of the base. 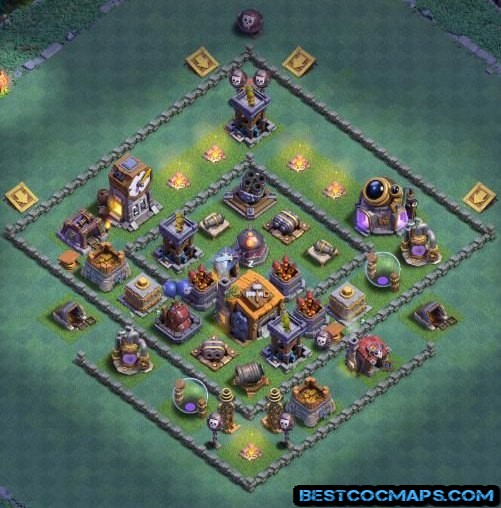 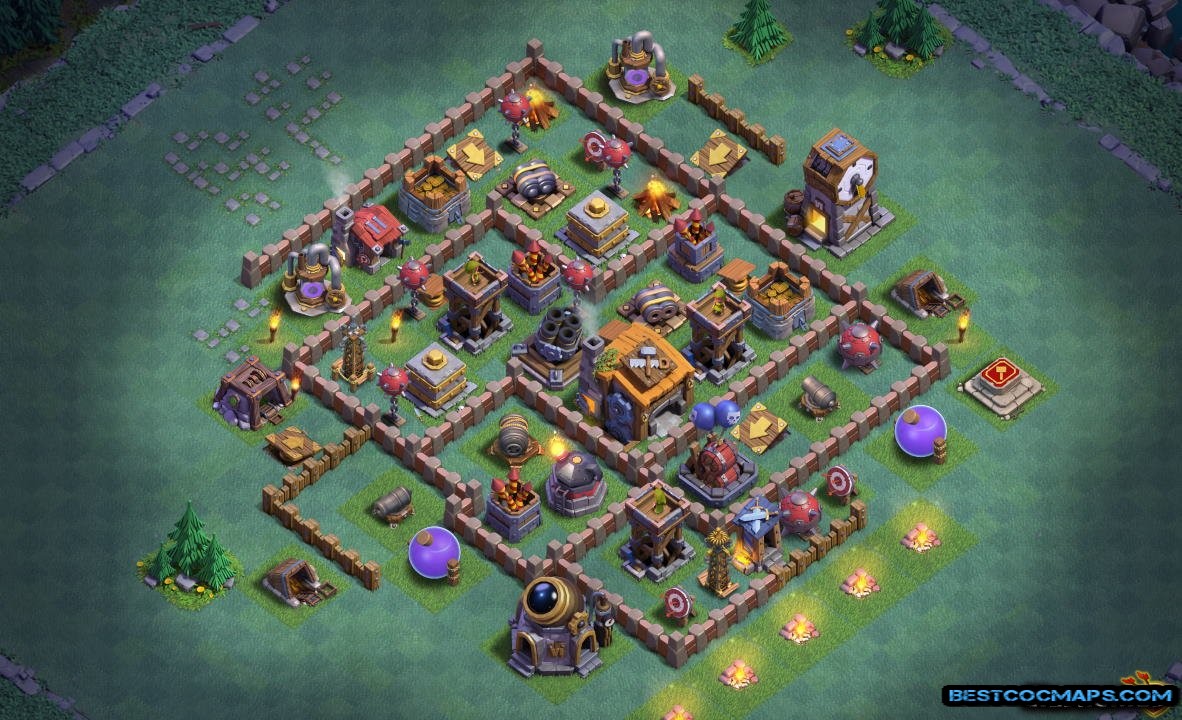 The base which we are about to discuss now is one of the best if not the best bh7 bases. At the center, we have the builders hall, two archer towers, three mines, three firecrackers, multi mortar, giant cannon, two hidden teslas, guard post, two crushers, roaster, two double cannons, and the push trap. At the left of the center, we have three army camps along with an archer tower and the push trap. The clock tower and the stat laboratory are at the center’s right. 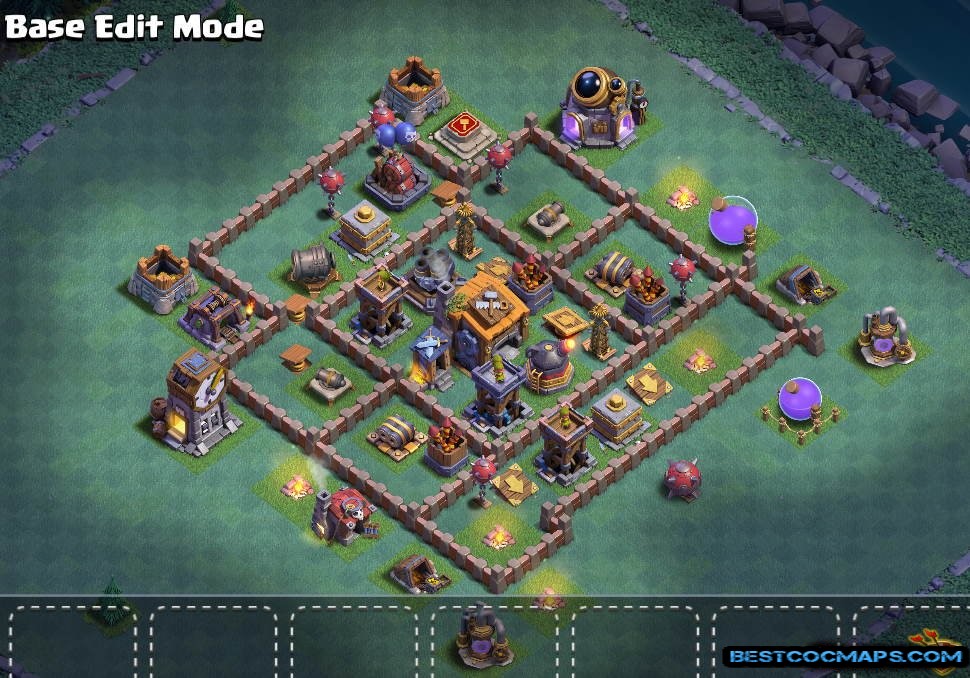 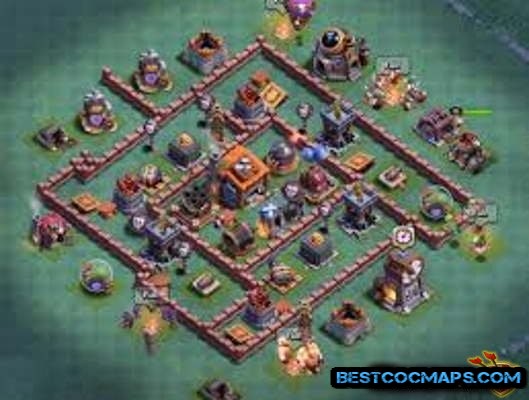 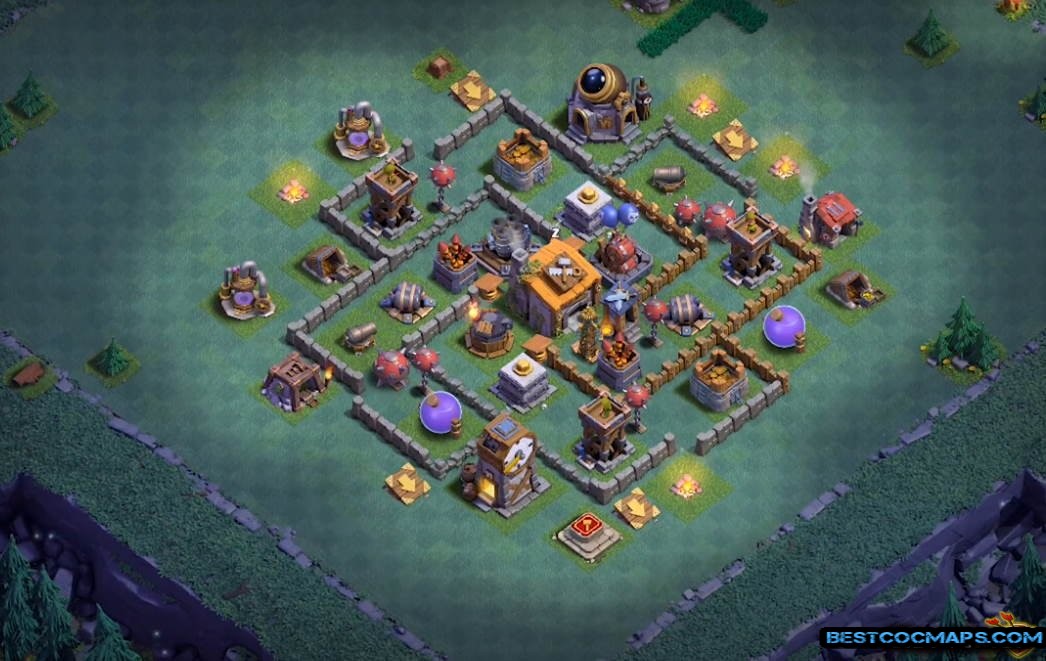 Above the center, we have a star laboratory and the two army camps. Outside the walls, we have four push traps, two gold mines, two hidden teslas, elixir collector, builder barracks, elixir storage, gold storage, mega mines, and elixir storage. 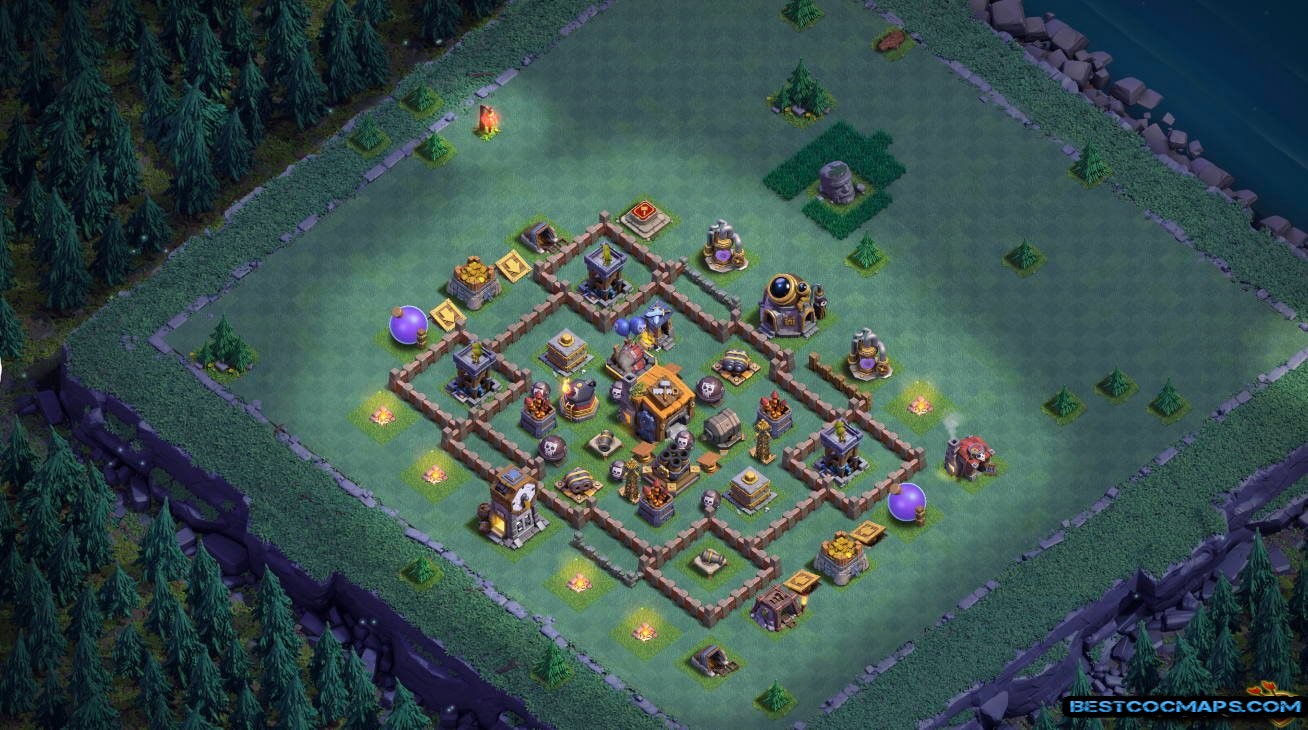 We have discussed the best bh7 bases 2021 in this article. Download these designs without any worry because these bases can defend almost every attack.