If you are looking for top-level TH9 Farming Bases, so you are at the right place. Have you ever seen the base designs where you can pull of the loot easily like in these town hall 9 farming bases 2021? If not, so check out these bases without wasting any time and use these bases by downloading them. 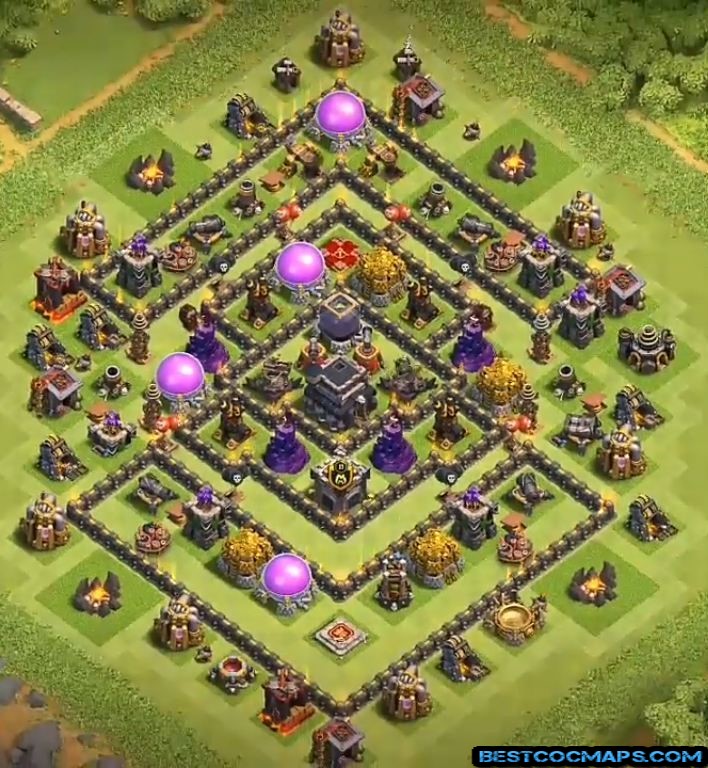 Two cannons, two giant bombs, two archer towers, two mortars, two dark elixir drills and elixir storage at the top left. Some buildings are outside the compartments as well that are protecting the base. 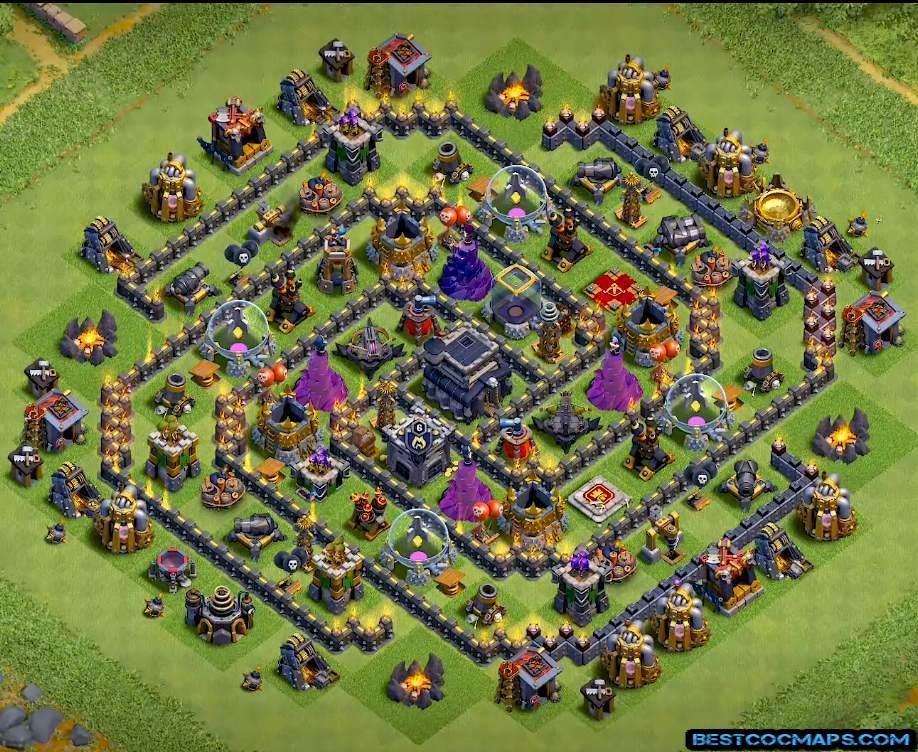 Another compartment that is starting from below the center and passing from the right. Hidden tesla, clan castle, a wizard tower, gold storage, barbarian king, air defense, dark elixir storage and mortar is below the center. 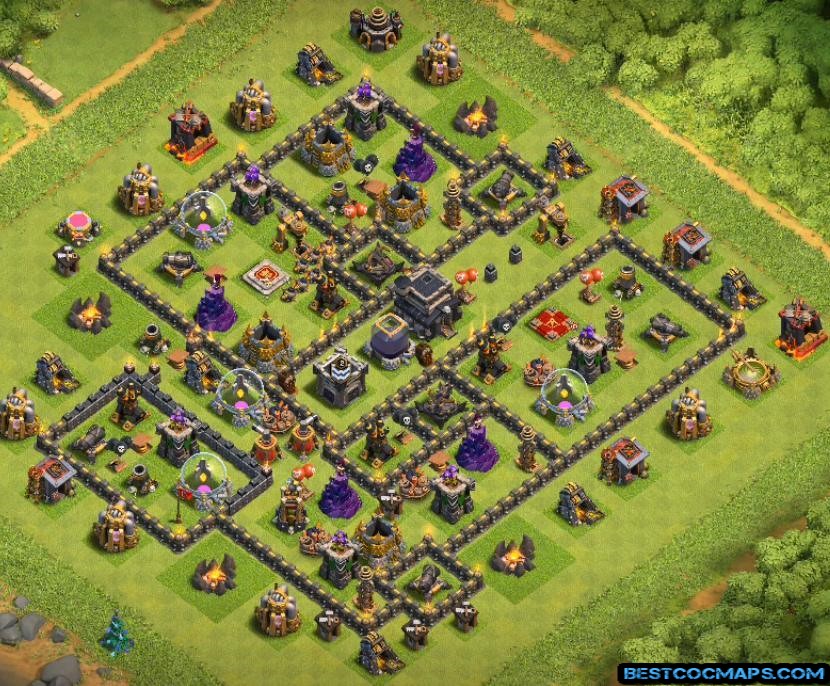 Another compartment starting from the right passing above and left of the centre. Air sweeper, an X-bow, Wizard tower, gold storage, barbarian king, air defense, elixir storage, a mortar, an archer tower, giant bomb, dark elixir storage and a cannon. 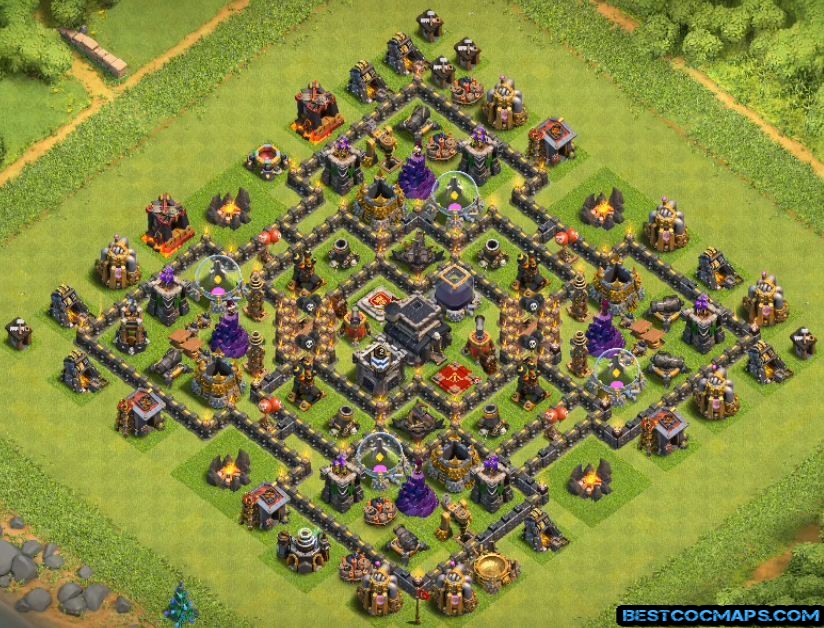 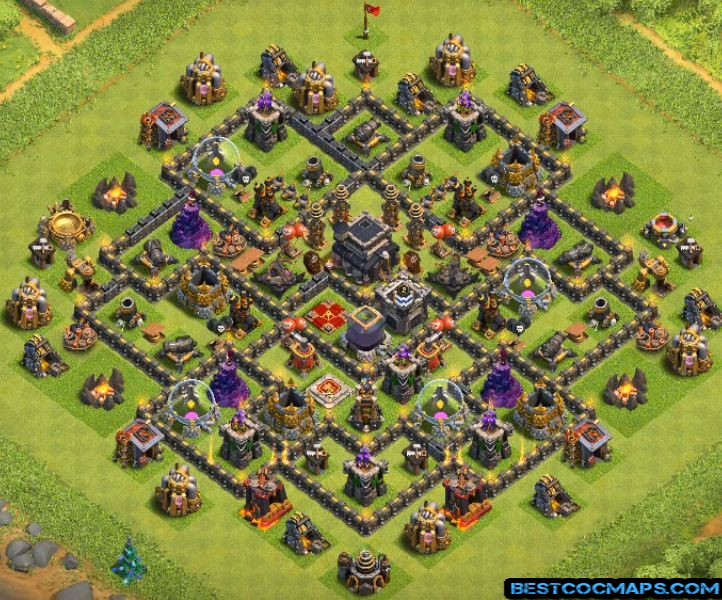 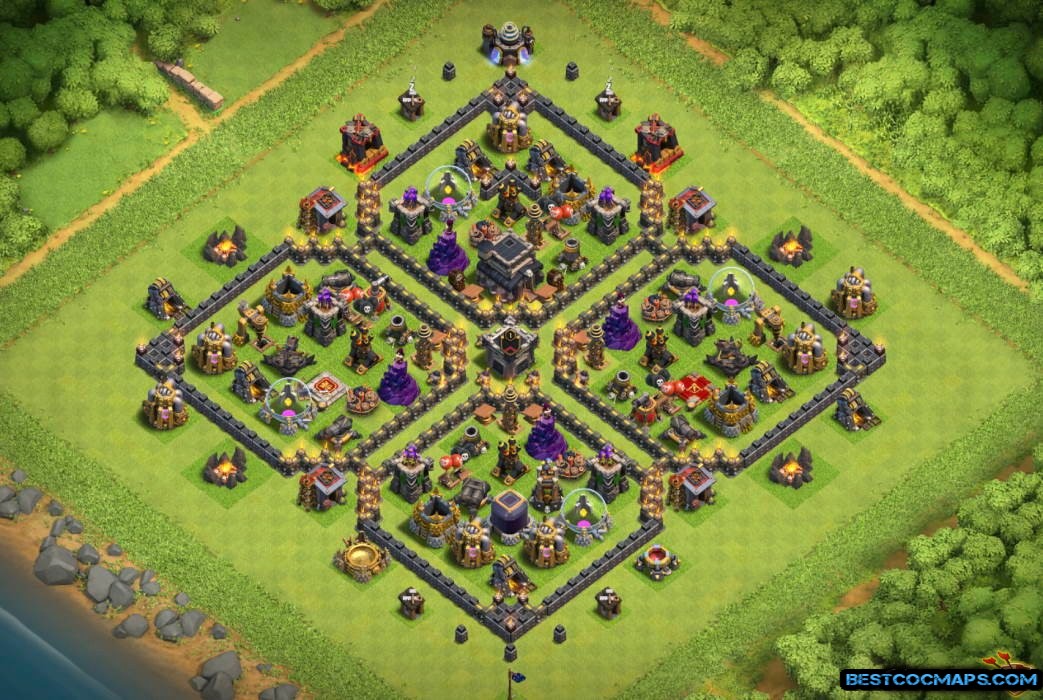 Townhall, Clan castle, dark elixir storage, barbarian king, archer queen and two air sweepers are at the centre. Air defence and mortar are placed around the centre along with two X-bows. At the top right, we have two hidden teslas, two cannons, an elixir and gold storage, archer tower and a wizard tower. 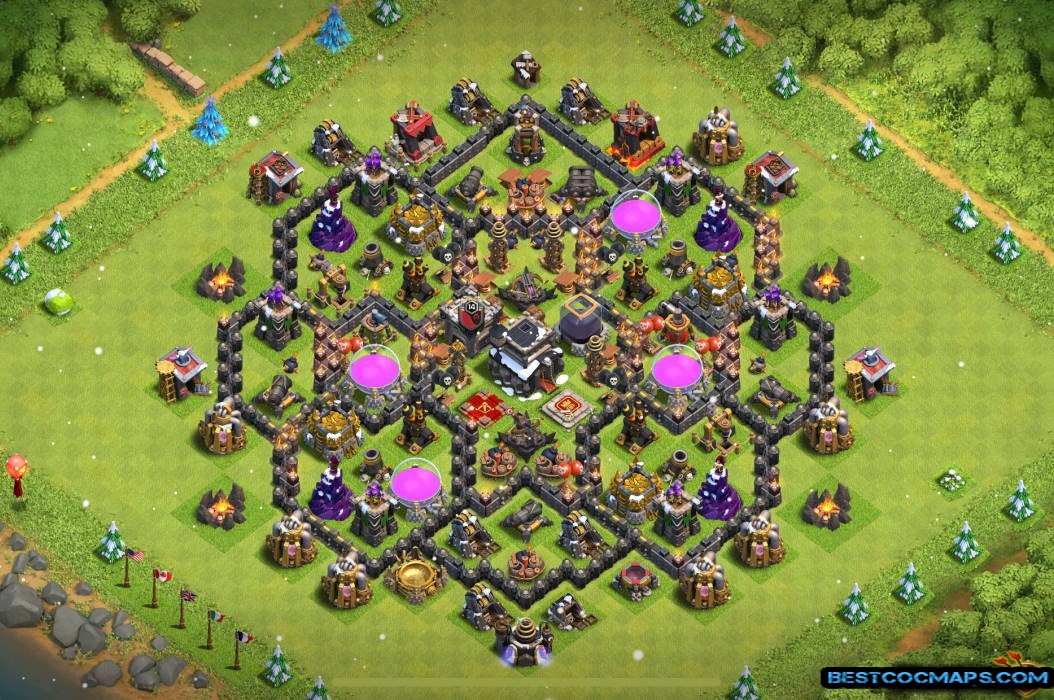 Almost identical buildings are in the bottom left as well with a difference of a bomb tower and a single cannon whereas two cannons are placed at the top right. Gold and elixir storage, two archer towers along with a wizard tower, a cannon, giant bomb, and a dark elixir drill at the top left and the bottom right. Other buildings are outside the walls protecting the base. 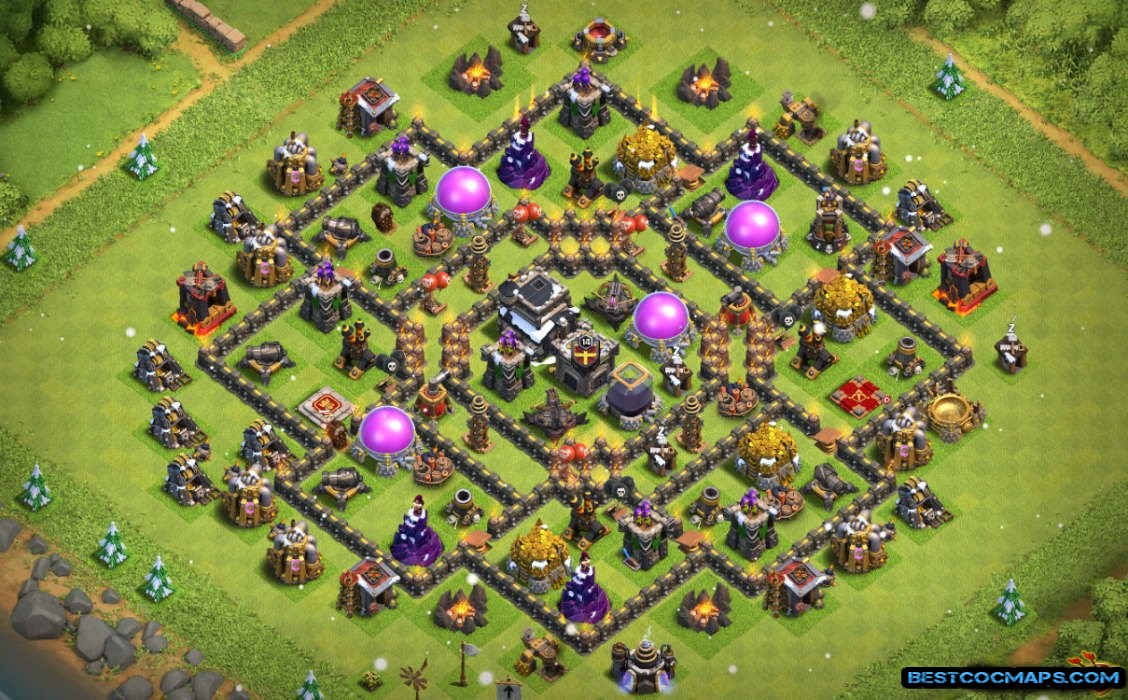 A clan castle, dark elixir storage and an archer queen are at the centre. Above the centre, we have a compartment that is going towards the bottom left and the top right. Townhall, four hidden teslas, two X-bows and two air bombs. An X-bow, a giant bomb, a wizard tower and a cannon are placed at the bottom left and the top right. Below the centre, we have two air sweepers, a bomb and an archer tower and a barbarian king. 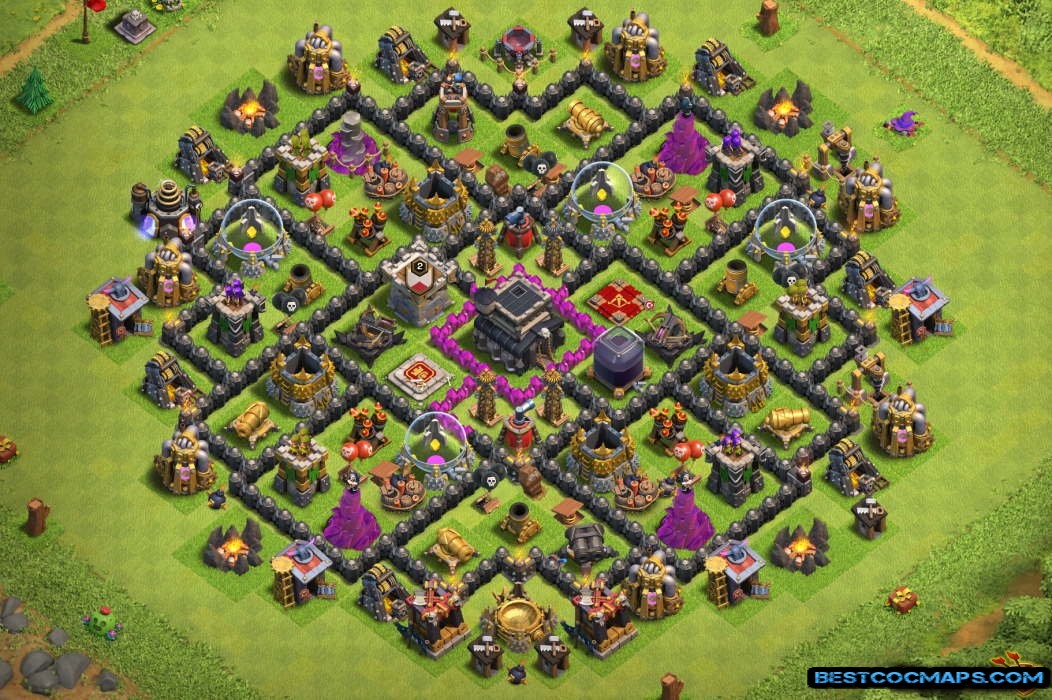 At the top left, we have a cannon. After that, Similar buildings are placed, which are at the top right. Gold storage, an air defence, a cannon and mortar are placed in the next compartment. 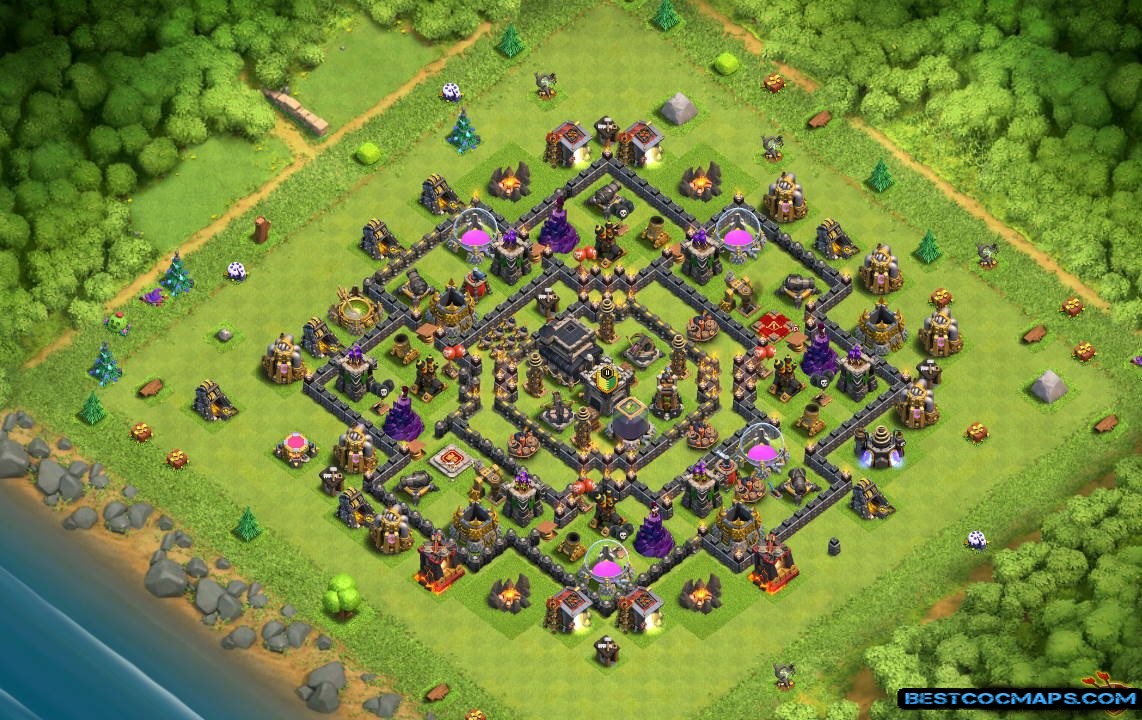