TH7 Farming Base Anti Everything 2022 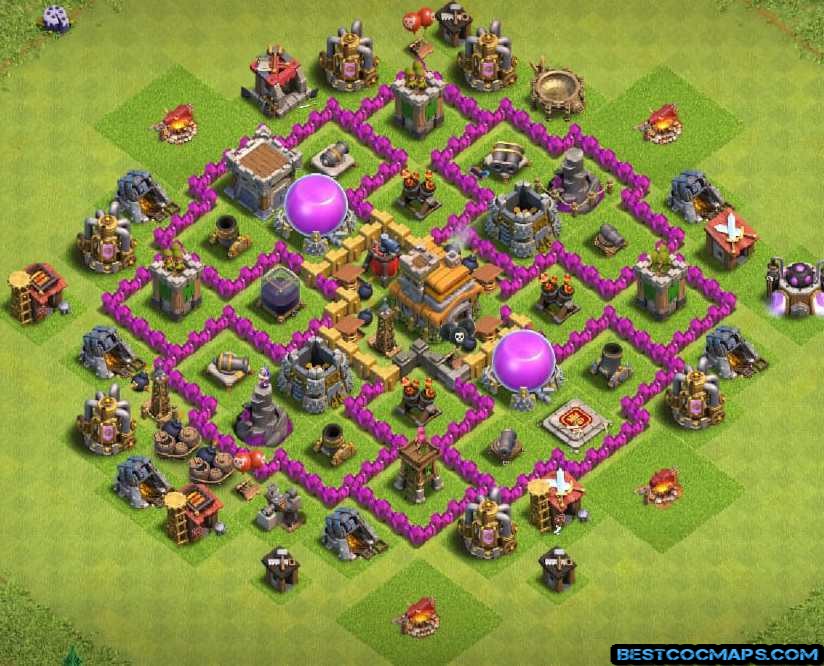 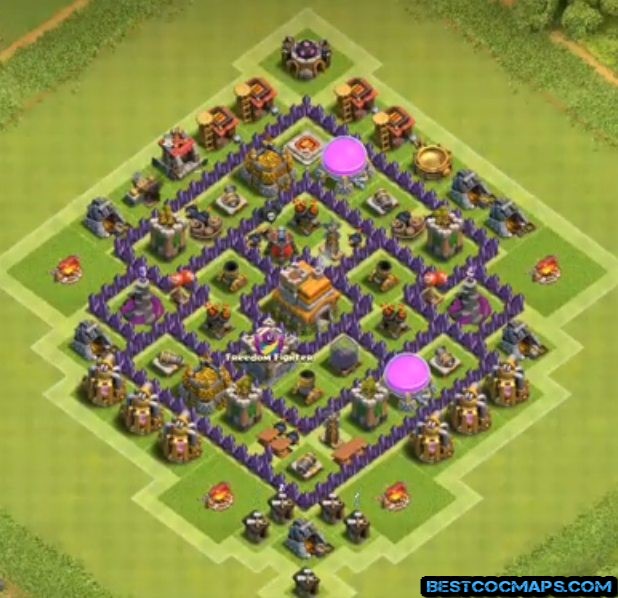 We have a town hall in the center. Three air defenses, an air sweeper, hidden tesla, three mortars, and the dark elixir storage are around the center. Wizard towers are at the top right, and the bottom left. At the top left, two archer towers, two giant bombs, two cannons, gold storage, elixir storage, and the barbarian king. 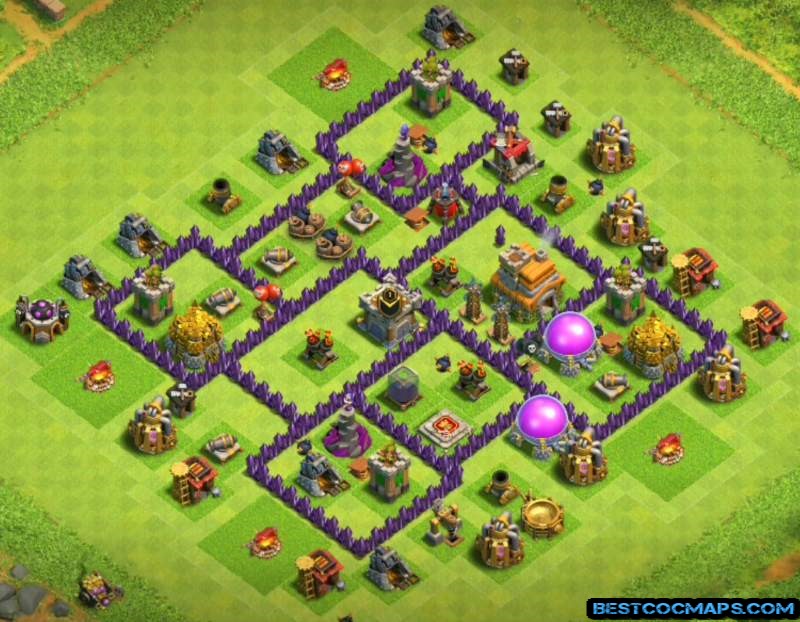 At the bottom right, we have two cannons, gold storage, elixir storage, two archer towers, hidden tesla, four spring traps, and a cannon. Other buildings are outside the walls for protecting the base against the opponents. 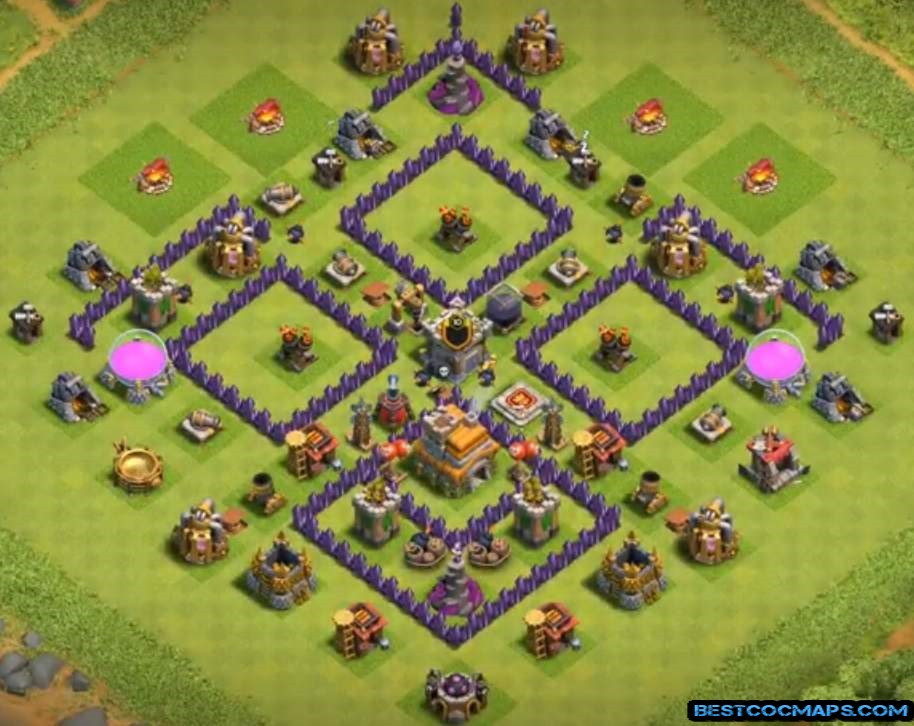 The base which we are discussing now is one of the best th7 farming bases. Clan castle and air defense are at the center. Above the center, we have the townhall, two hidden teslas, and air defense. At the bottom left, we have a cannon, gold storage, and an archer tower. Identical buildings are at the top right except for the top right. Wizard tower, an archer tower, and a spring trap are at the top left. The same buildings are at the bottom right except for the gold mine.

best clash of clans base th10 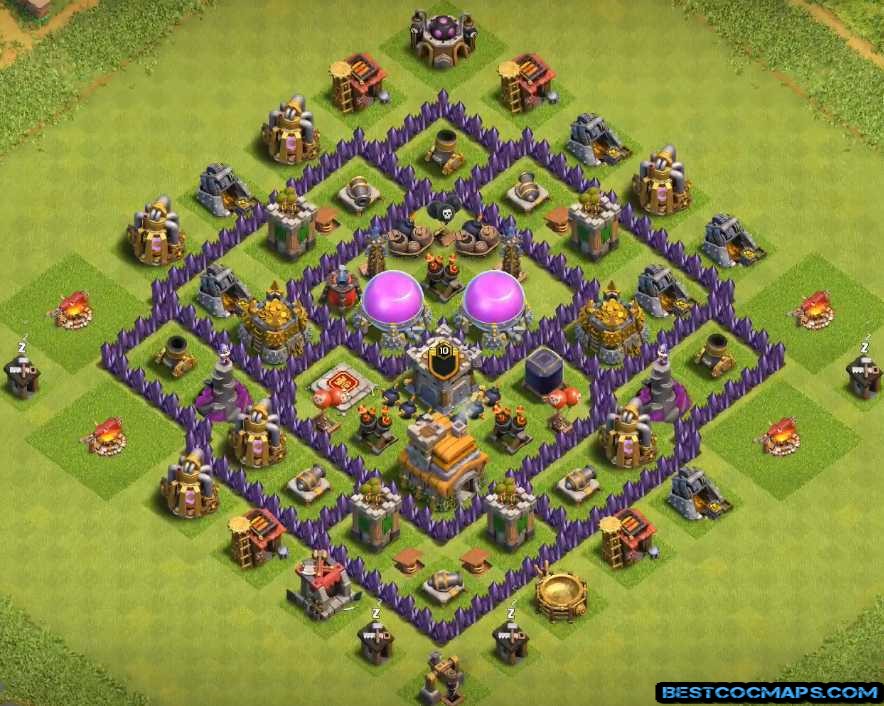 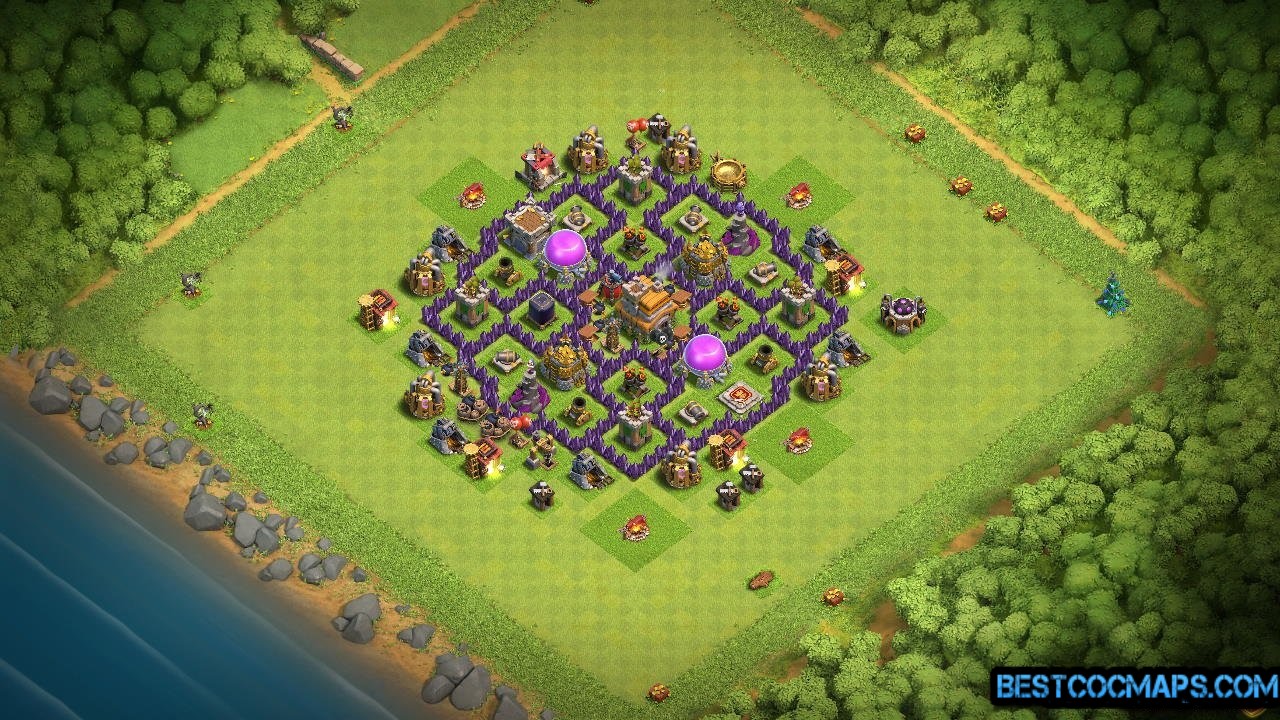 Clash of Clans TH 7 Farming Base

The townhall, two archer towers, two giant bombs, and the wizard tower are at the bottom right. In the other three compartments, we have three air defenses. The clan castle is at the center. An air sweeper, two hidden teslas, a barbarian king, a dark elixir drill, two cannons, two spring traps, and two mortars are around the center. 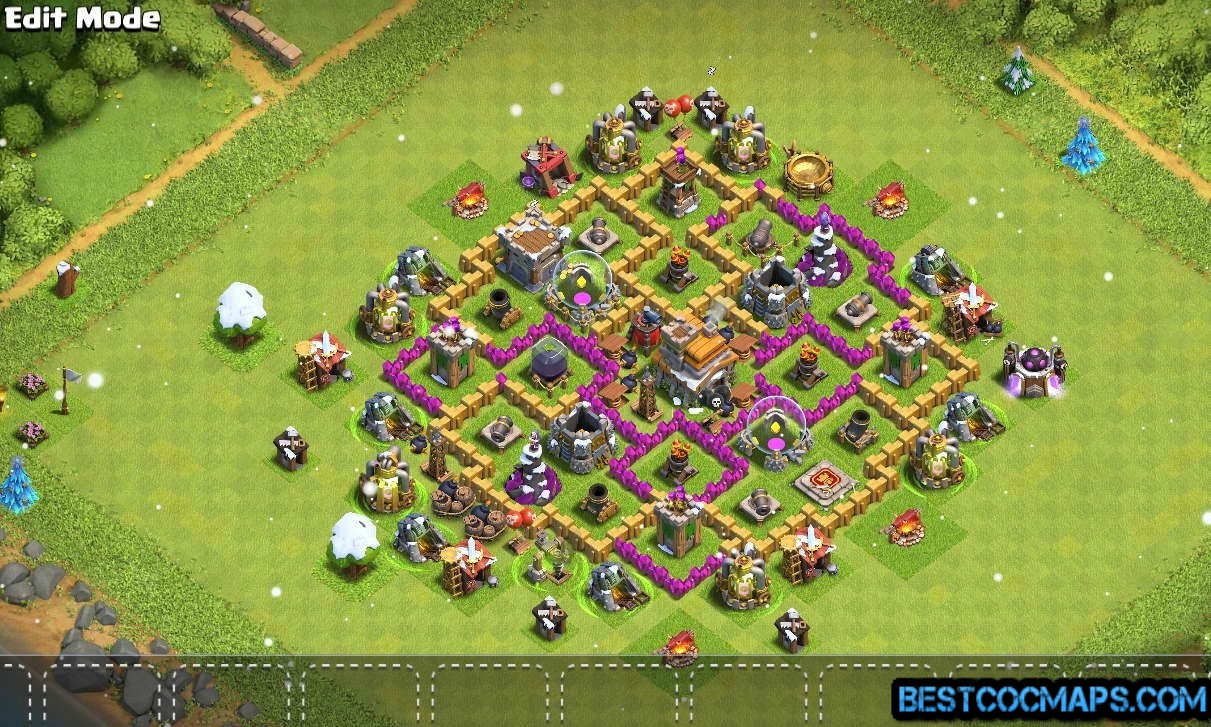 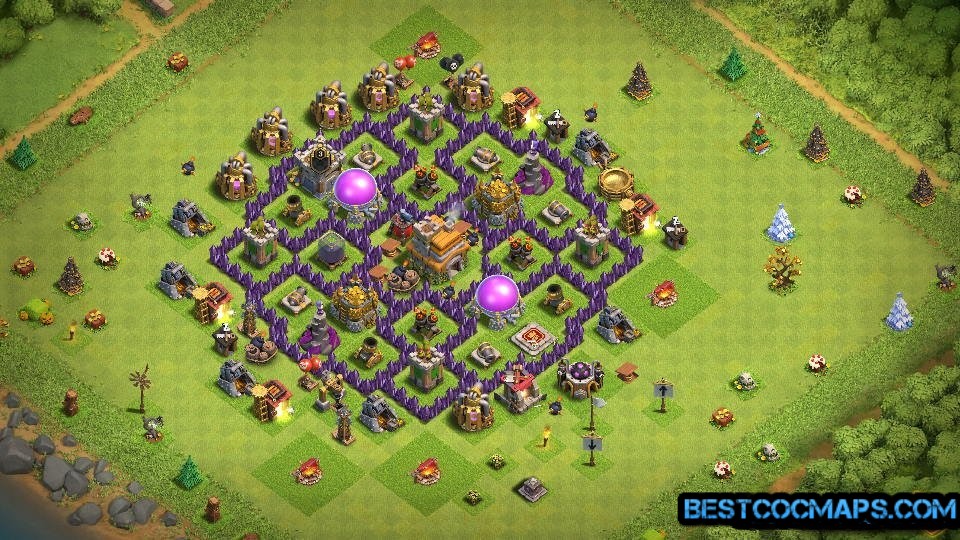 This base is recently added to this list and is one of the best th7 farming bases if not the best. At the center, we have the townhall, two air defenses, dark elixir storage, clan castle, and the barbarian king. Two giant bombs, air defense, air sweeper, two hidden teslas, and two elixir storages are above the center. A mortar is placed at the top left. At the bottom right, we have two archer towers, two spring traps, and a cannon. 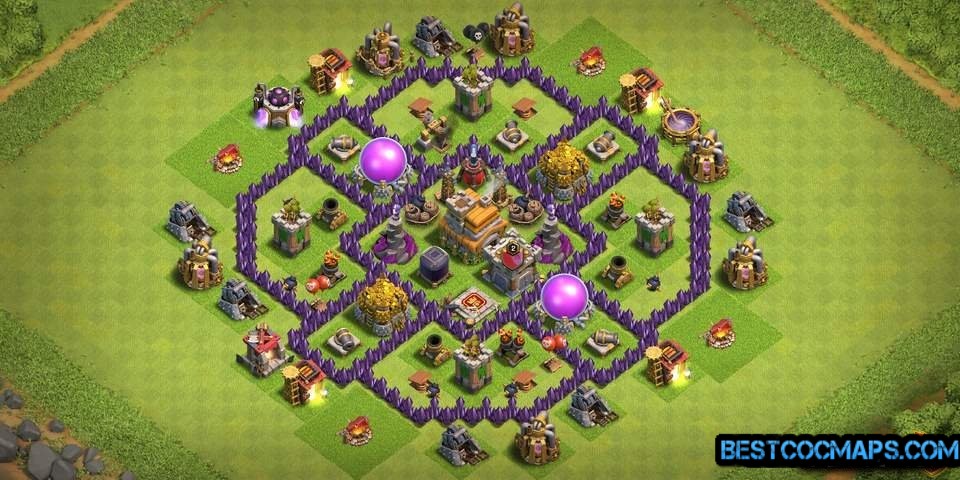 A cannon, an elixir collector, a wizard tower, and a mortar are below this base. Identical buildings are at the top right. Above the center, we have the gold mine, gold storage, an archer tower, and a cannon. The same buildings are on the left side of the base. Other buildings are placed outside the walls for defending the base against the attackers. 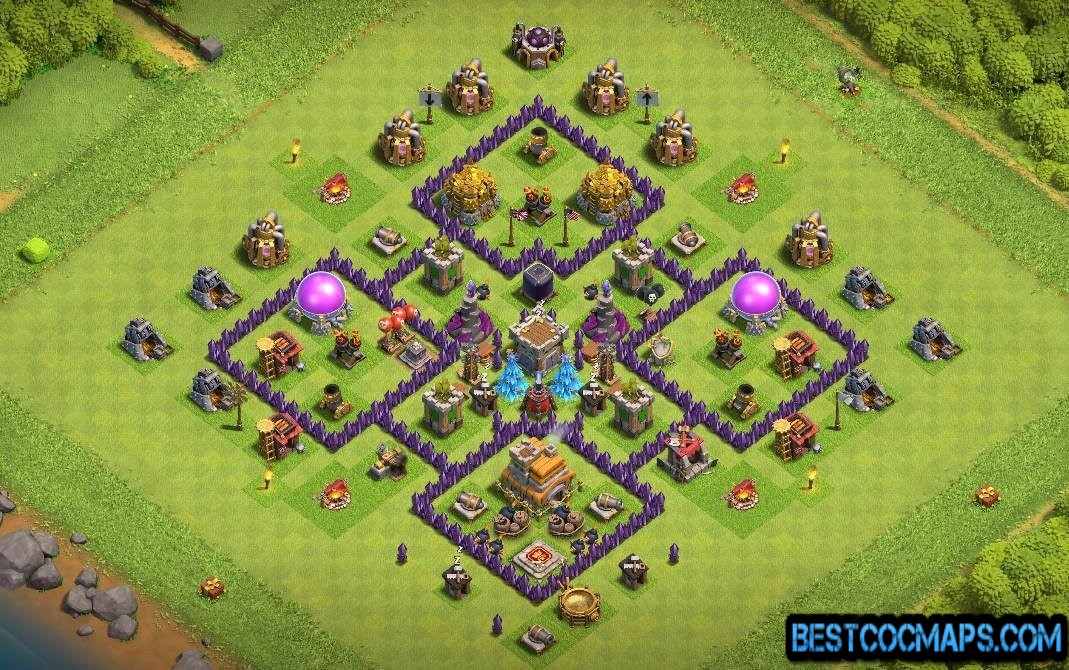 These are the best th 7 farming bases anti-everything, dragon as well as a giant healer.  Download these bases by clicking on the download button and use them without any worry.